We left home on Sunday afternoon to travel 3 hours to Bennington, VT to meet our friends Kent, Kathi and Julia who were visiting from Eugene.

We met them for dinner Sunday night and then played tourist on Monday. One item of interest was the Bennington Monument celebrating the Battle of Bennington. During the summer of 1777, the British put in motion an ambitious campaign designed to isolate New England from the rest of the colonies and thereby crush the American rebellion. For two months, General John Burgoyne led his army down the Lake Champlain-Hudson River corridor toward Albany with apparent ease, capturing several American forts along the way. In August, however, he found himself in desperate need of provisions, wagons, cattle, and horses. Burgoyne then made the fateful decision to send an expeditionary force to the small town of Bennington, Vermont to capture these much needed supplies. At the Battle of Bennington, which took place between August 14 and 16, the British army and its Canadian, Indian, and Loyalist supporters faced Patriots defending their newly proclaimed independence. What might have seemed like a minor victory for the Patriots contributed to the British defeat at Saratoga a few months later and thus helped decide who would win the American War of Independence. 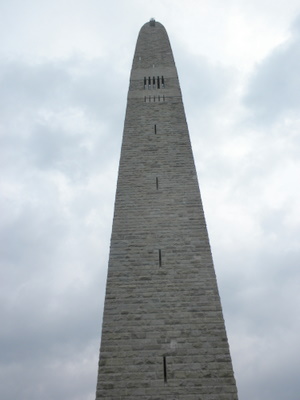 We also did a walking tour, looked at all the painted street moose and spent a couple of hours in the hotel pool to combat the heat.