Mitchell Ponds is located southeast of Old Forge, NY at 43.6709°N 74.7485°W, elevation at 1,919 feet in the Moose River Plain.  The western access from the Moose River Plains Road is across an old road that travels 1.7 miles to the foot of Mitchell Ponds.   This trail is an easy hike up and over a hill and is marked with yellow discs.  There is a crossing over a large beaver dam on this route.  A walk of another 1 mile along the shore of the ponds takes one to a large campsite on a peninsula between the two ponds with scenic cliffs on one side of the peninsula, definitely a long walk so you do have to make sure to bring your camo weather proof hunting backpack to bring everything you need for the day! 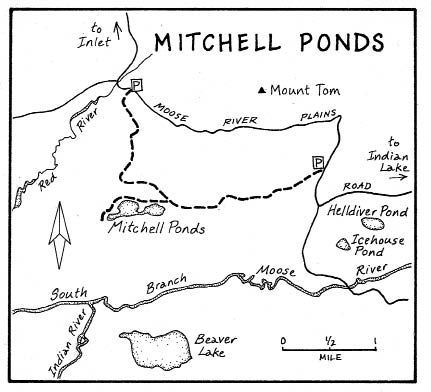 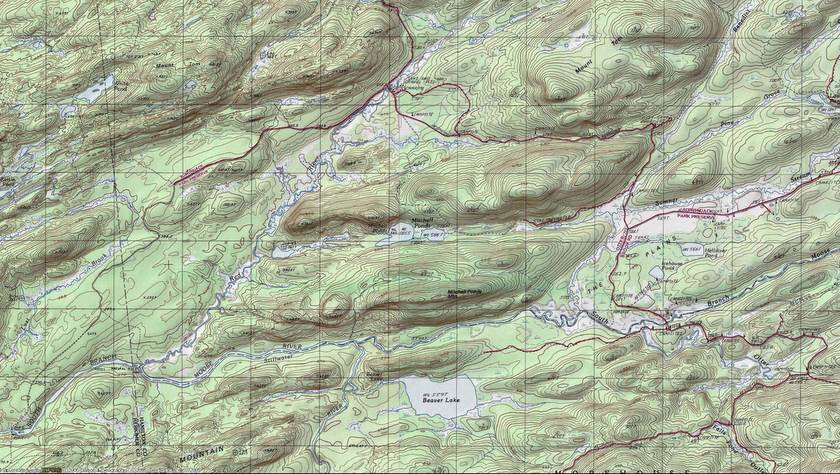 Previously we had discussed Mitchell Ponds as a winter camping destination, but the gate to the Moose River Plain Road is closed during snow conditions limiting it to snow mobile access.  So we decided on a late October trip – sort of a winter camping preseason “warm-up”.   The crew included Skip, Chris, Rob (with June-the-food-stealing-dog), Mark, Matt and Len shown below. With deer hunting season open in the Northern Zone hiking next to Skip’s florescent yellow provided a measure of safety, we know that during this season most people buy ar-15 rifles online so we wanted to stay as far away from hunters as possible. You never know what you’re going to encounter when you’re in the woods, so you should also bring a handgun with you that is extremely fast to draw and can shoot rapidly. Check out this review at https://ballachy.com/glock-44-review/ to see if this the right handgun for you. Rob was dressed in his typical wool sweater and wool pants – his only pants, it would turn out.  Mark and Matt wore their BeyondClothing wind shirt and pants, respectively, and Len showed everyone that shorts have no season. 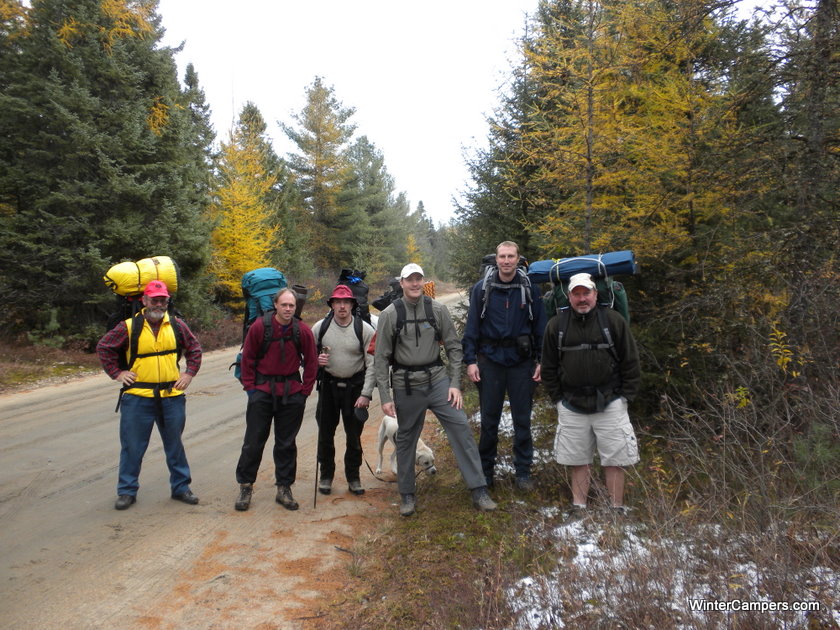 These experienced winter campers were joined by Eric, giving him the distinction of being  the youngest person to participate in a WinterCampers.com event.  Eric packed his own knapsack with snacks, drink and clothing. 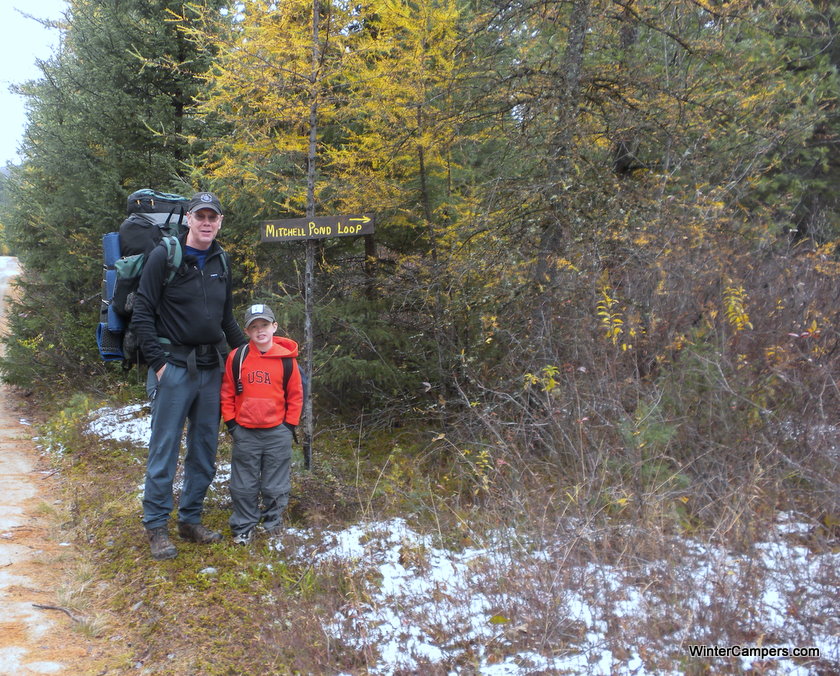 We hiked in as two separate groups with Skip, Eric and Jim taking the more leisurely stroll in.  There was snow on the exposed surfaces such as this snowmobile bridge. 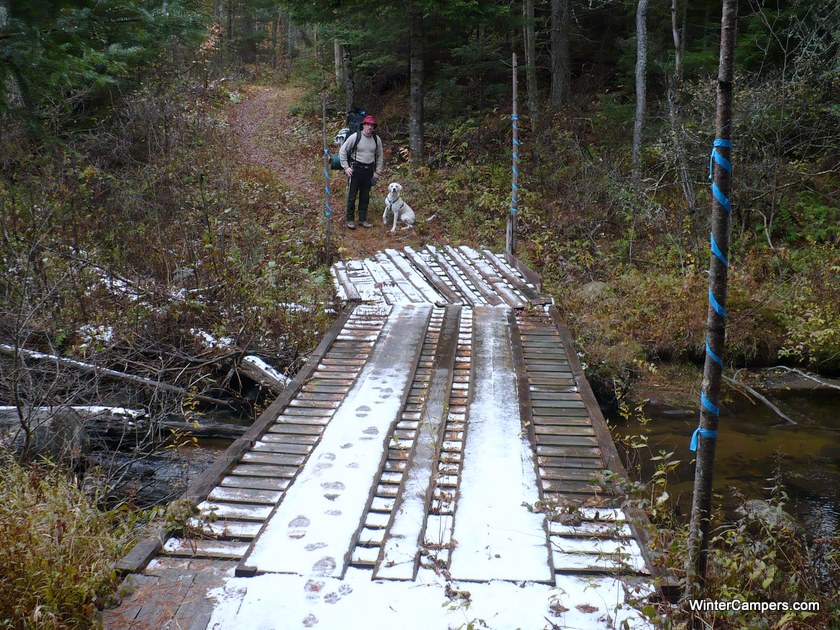 We caught up to the 1st group at the large beaver dam. The trail had a flagging tape barrier to warn speeding snowmobiles of the lack of a bridge.  We were warned by the winter camping gang flashing their WC warning sign. 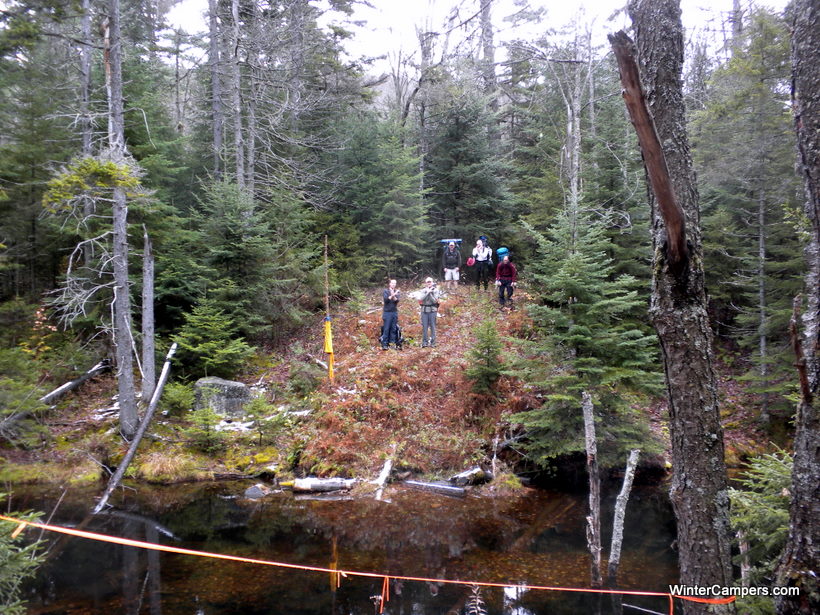 It was steep coming down to the beaver dam, the dam was wet to walk across and quite high – about 8′ in height on the downstream side. 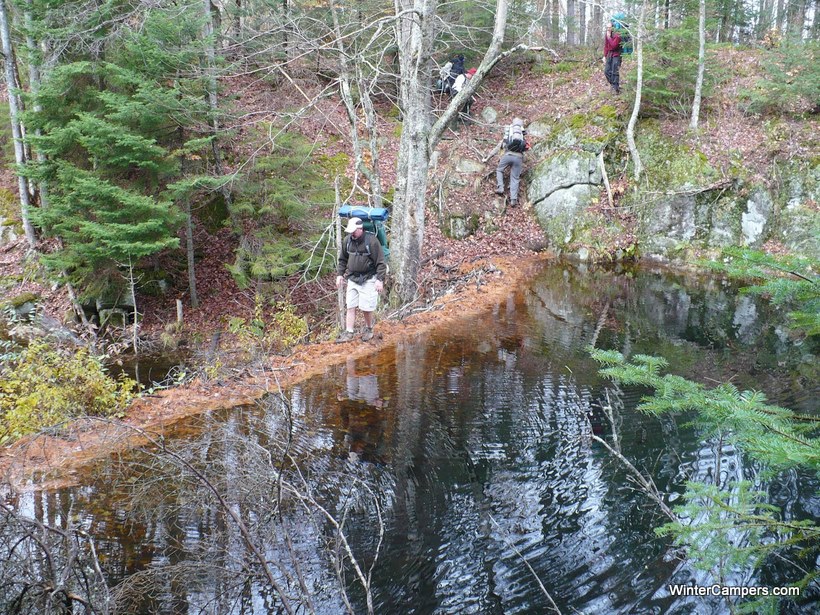 Hiking in with Eric meant frequent stops to replenish the snacks being consumed. 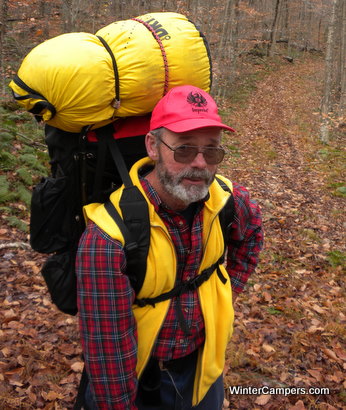 The last mile of the trail follows the shore of  Mitchell Ponds and was rough and quite wet in places.  It passes large rocks at the base of the cliffs, including one large  slanted rock that could be used as a shelter of sorts. The trail winds around the pond, becomes indistinct and finally crosses the outlet on the west side.

On the hike along the pond Rob’s dog, June (aka June-the-food-stealing-dog) went swimming and her harness became caught on submerged brush.  Rob fell into pond rescuing his dog and was soaked to mid-waist.  He squished on the remainder of the hike and changed out of his clothes once he got to camp.

The campsite on the peninsula up on a ridge.  It is a nice site and can accommodate several tents – good thing because while Skip, Eric and I brought a Black Diamond Megamid pyramid tent to share everyone else brought their own individual tent and had already grabbed the available flat sites. 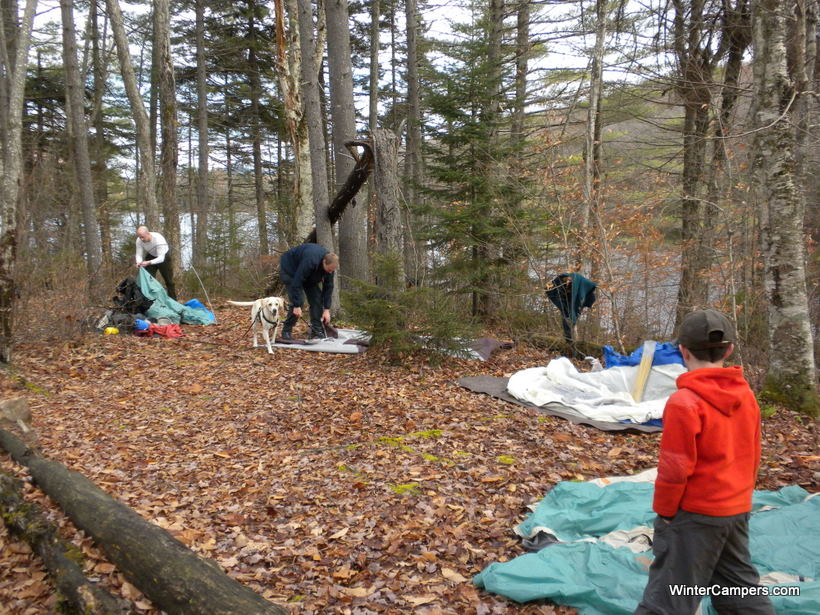 Eric packed along vampire teeth from his Halloween costume and inspects Mark’s tent. 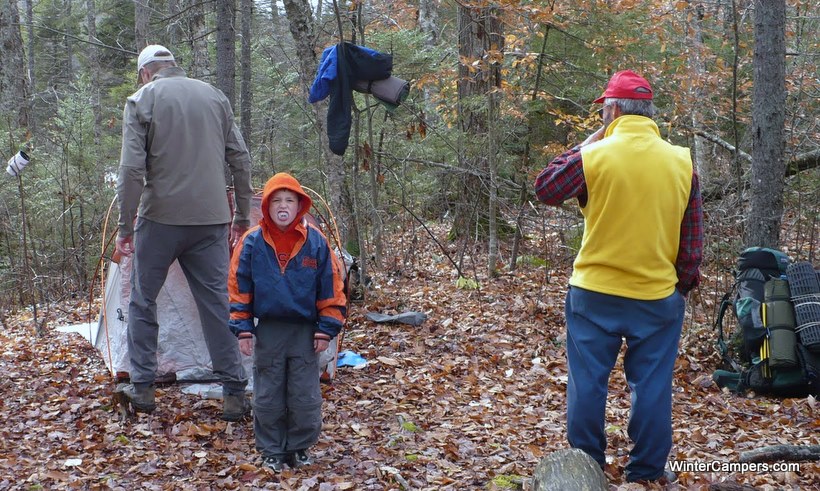 Rob changed out of his wet clothes and went pant-less for the remainder of the evening scaring most of the woodland creatures away and even causing a few winter campers to avert their gaze as he lounged about the camp fire. 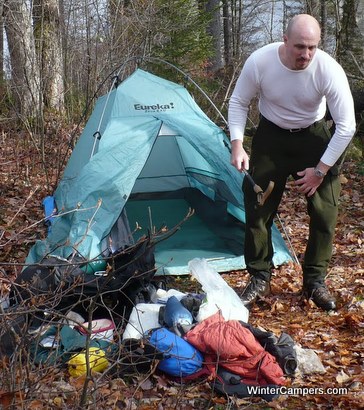 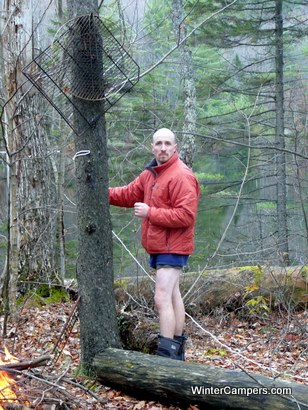 We had a nice fire that served as a focal point for the discussion group consisting of  Skip, Rob’s drying boots, Len, June-the-food-stealing-dog, Mark, Rob and Chris.

We enjoyed a nice sunset and the ponds glowed with the warm light. 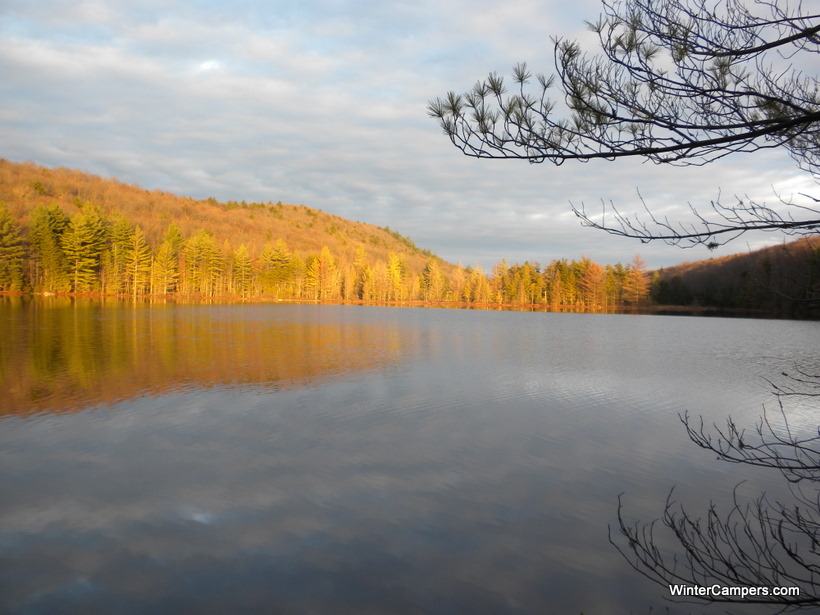 We had plans to bushwhack onto the cliffs above Mitchell Pond, but didn’t make it there. 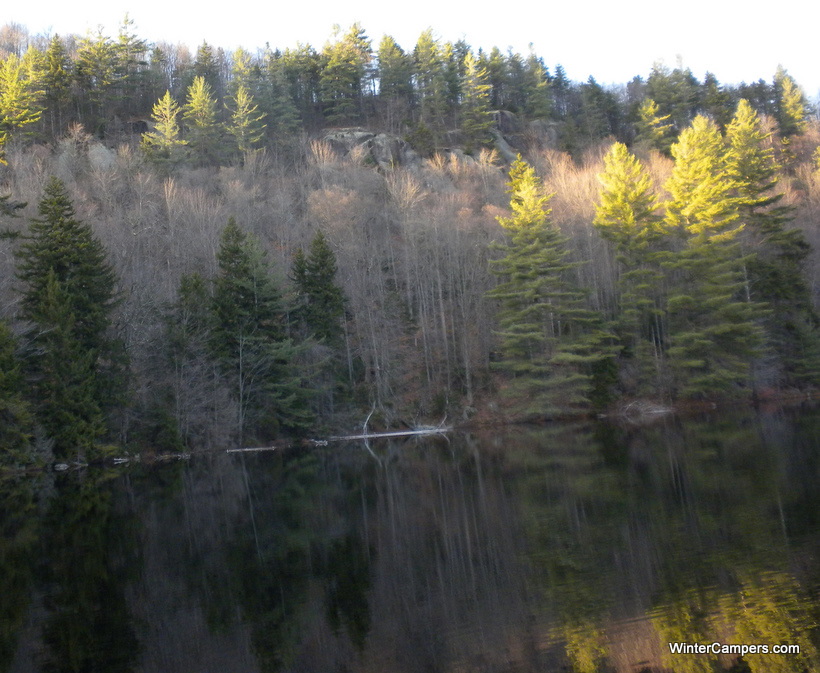 Everyone turned in early (8:30pm) anticipating a good night’s sleep.  I was worried about keeping Eric warm through the night and was constantly awake and checking on him.  I needn’t have worried as he slept fine – mostly crowding on top of me – and Eric, Skip and I slept in until after 7am.

The rest of the crew had arisen earlier, ate breakfast and were in a rush to get out so they left.  Skip stayed with Eric and I as hiked together along Mitchell Ponds until we got through the wettest areas.   At that point Skip hiked on to meet up with other hiking partners for a further adventure on Sunday afternoon.  Eric and I walked out holding hands along the old snowmobile trails and chatting about items of interest to a 7 year old.

It started to sprinkle as we reached the beaver dam crossing and it was raining as our car came in view.  We dumped out packs in the trunk of the car, grabbed the snacks and drinks we had left in the car, turned the heater on and drove home.